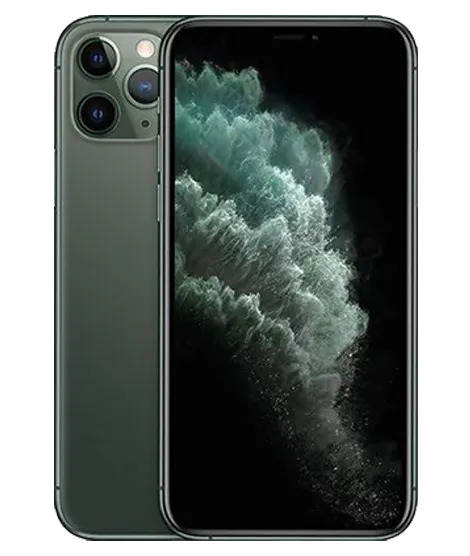 To begin, the front of the Apple iPhone 11 Pro looks just like the one on the iPhone X and the iPhone XS. Its 5.8-inch screen takes up most of the front, and its somewhat large notch at the top is where the Face ID face recognition mechanism is located.

Differences may be seen on the rear, as the camera module now has a square shape, taking after the sheet of glass it was attached to. This is the signature module of the model because of its size. Apple’s choice of matte surface for glass, which is also the hardest ever used on a smartphone, is a design win.

The new iPhone 11 Pro comes in gold, silver, space grey, and a new, exciting color called “night green.” The latter is misnamed since it is more accurately described as a grey that only appears dark green under certain lighting conditions.

Even though the Apple iPhone 11 Pro is somewhat thicker and heavier than the iPhone XS, the device nevertheless manages to maintain the same level of comfort and usage as its predecessor. In turn, a bigger battery might be installed. Steel, which is more durable than aluminum but is more prone to scratches, is nevertheless used for the frame.

Even in low light, you can use Face ID to securely unlock your smartphone with just a glance. While it’s still difficult to do so with the iPhone 11 Pro flat on a table, the iPhone 11 Pro now supports facial recognition at even more extreme angles (unless you put your head).

The Super Retina XDR screen has the most color accuracy and the highest maximum brightness of any smartphone display I have ever used (approximately 770 nits with 100% of the screen lighted in white). It also includes a True Tone feature that automatically adjusts the white balance to suit the surrounding environment.

The screen’s broad color gamut is made possible by its support for HDR content and its coverage of the DCI-P3 color space. Because iOS handles color management automatically, the display adjusts to the best color scheme for the current context.

Just wish it had the always-on screen feature of other cellphones (and also the Apple Watch Series 5).

The new Apple iPhone 11 Pro, which has the advanced A13 Bionic processor, once again establishes new benchmarks for performance. Although its CPU and GPU are up to 20% quicker than those found in the A12 processor included in the iPhone XS, the most notable improvement is the chip’s remarkable decrease in power consumption.

The A13 Bionic chip is optimized for machine learning, with a more powerful third-generation Neural Engine that analyses films and photographs in real-time to enable stunning shots.

Even if you can’t tell the difference between the iPhone 11 Pro and its predecessors, which were already incredibly quick, the iPhone 11 Pro feels highly fluid and responsive in everyday use. The true potential of the A13 Bionic is shown in different contexts, such as picture and video processing, stabilization, face recognition, and augmented reality.

The audio quality of the iPhone 11 Pro has also been greatly enhanced by Apple. This is true even when comparing it to the iPhone XS. When listening to a movie or music with surround sound, stereo speakers provide a more realistic sense of space and also support the Dolby Atmos format. Not surprisingly, it doesn’t include a connector for headphones, so you’ll have to use a wireless solution like Bluetooth or wired headphones.

The Lightning connection on the Apple iPhone 11 Pro allows for rapid charging (no USB-C for now). A rapid 18W charger included thanks to Apple, can recharge your device to 95 percent capacity in about an hour and a half.

Snap on Smile Treatment in Dubai

How Magento Hyva Theme is Advantageous for Your E-commerce Business?